Providing endless possibilities for exploring the West Coast on the open road.

In recent years, the #VanLife hashtag has spearheaded a lifestyle movement, inspiring millions of Instagram posts and countless tricked-out camper van conversions. William Jarvis became inspired by this movement, shifting gears from a desk job to starting his own business.

With staycations proving a necessity in 2020, we caught up with William to get the story behind Honest Camper. Don’t forget to check out Honest Camper and thousands of other awesome local businesses in Marketplace BC.

How did Honest Camper get started?

It all started back in 2017 when my son and I went on a trip. We rented an old school Volkswagen van. I loved the experience so much, I just thought it would be really cool if others could experience nature the way we did, kind of unplugged. Don’t forget, it was around this time the whole minimalism and tiny homes concept was becoming popular, so I thought ‘why don’t we take these retro vans and make them minimal, clean inside, give them a tiny home vibe and rent them out.’

I wanted to really nail that glamping vibe, and market to the higher end of the market. 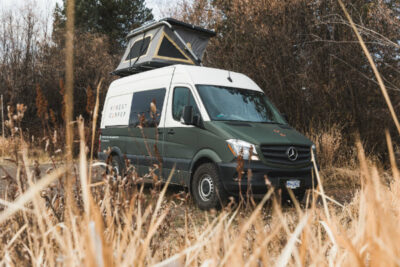 What type of vans can people rent from you?

We put our vans into two categories, modern or retro.

Our modern vans are along the lines of the more popular Sprinter camper van that you see a lot of the #vanlife stuff happening with on social media. We have the Mercedes Metris Camper van, and we’re one of the first companies in Canada to get it, it’s going to be huge for us. So, they’re the modern options.

On the retro side of things, we have the classic 80’s style Volkswagen camper vans people have probably seen over the years. They are super popular, and we have seven of those.

Do you renovate the vans yourself?

The Volkswagen campers we have came fully equipped with all the features you’d expect from the early 80’s, so they’re pretty old school! What we’ve been ripping out the interiors and making them much cleaner and more modern, while updating all of the old appliances. We also took out those super heavy and boxy cabinets those vans have and streamlining what’s inside. The décor is modern, with lots of whites. People really like what we’ve done with them!

The Sprinter vans have a design we did on our own as well. We got a little help from contractors along the way, but for the most part we did those as well. For the new Metric vans, we’ve got some friends of ours at WERK Number One in Richmond who specialize in Metric conversions. We reached out to them to help us with the first one we did.

We’re mostly doing this stuff ourselves and finding inspiration from places like Pinterest. I’m a pretty handy guy and I love to build stuff with my own hands. That’s kind of where this all spawned from! 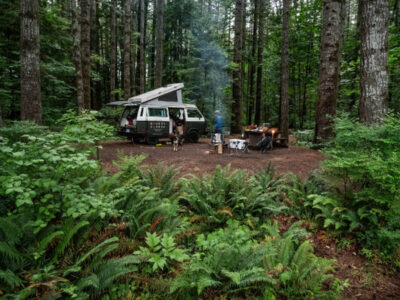 Where are some of the most popular places people take Honest Camper vans?

Number one for us would be Nanaimo. It’s such a fun trip to take in a camper. You hop on the ferry, drive two hours and you’re in a place with a totally different vibe to it, it’s been a super popular destination for us. Probably second would be people trekking down to the Oregon Coast. Obviously, with the border closed that’s not happening at the moment but we have seen an uptick in alternatives. Jasper is super popular and the Sunshine Coast.

There are so many different places here in British Columbia people can take the vans, park and have an amazing time. We’re pretty lucky to live where we do!

With staycations so popular this year, have you noticed an uptick in your business from locals?

Around 70 per cent of our business is international clients in a typical year. With flights shut down and borders closed, it’s had a major impact. Unfortunately, it’s not been as simple as locals coming in and filling those bookings. We have so many campsites here in BC, but everyone wants to camp right now after being cooped up in their homes for months. All of a sudden, all the campsites are full up. If people can’t book a campsite, they aren’t going to book a van. So the staycation trend has been a positive and a negative for us.

There’s people who have secured campsite bookings already and they rent a van for us, which is fantastic. But then there are others who are waiting until they get a camping spot before renting a van. It’s a chicken and egg situation for us but we’ve been doing ok. 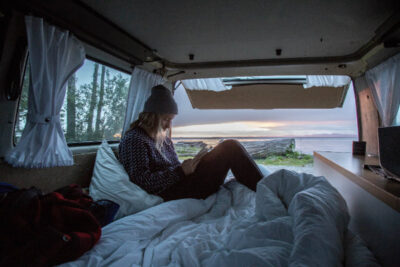 Final question, and one you’re uniquely well placed to answer – What’s your favourite place in BC?

That’s a tough question! I really like going to the Sunshine Coast because it’s a quick ferry ride away and you have all these amazing places to visit. I also really love Tofino, the beaches are phenomenal and it feels like you’re really getting away from it all when you go there. I’m all about unplugging and getting away and finding those opportunities to relax, so those are two spots I really enjoy visiting.

Providing endless possibilities for exploring the West Coast on the open road.

Long-established businesses continue to flourish on the Sunshine Coast